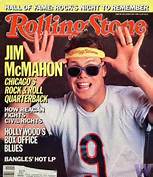 Jim McMahon. Acclaimed leader of the ’85 Bears. Truly a team to be reckoned with. Best ever, in my opinion.

Jim McMahon was indeed a punky QB, as he says in the infamous Super Bowl Shuffle.  Everyone thought he wore his ever-present sunglasses to be cool, but truth be told, he wore them because of an eye injury (fork to the eye back in his youth).  He was the epitome of cool, nonetheless.

He led the Bears to the Super Bowl, in a season full of excitement such as the Bears hadn’t seen in many years.  He rallied the troops and made super stars out of many of them.  He added pizzazz to an old fuddy duddy team.  His antics with Coach Ditka were legendary.  The world will never forget the 1985 Bears.

But Jim McMahon just might.  He has early onset dementia, mostly likely caused by the many hits he took on the football field.  Back in 1985, many idolized him.  If they saw Jim McMahon today, many would not recognize him, and many would pity him.  He is a broken man, both physically and mentally.  He sacrificed a lot for his notoriety and party days.  I saw a documentary on him last year.  It made me sad, thinking that this is what happens after your fifteen minutes of fame.  So many football players suffering the same fate.  He was so good.  So very, very good.  His play both on and off the field are the stuff dreams are made of, for many men.  I hope he still remembers, in his dreams.

I don’t think he will ever be forgotten, even if he forgets us.  Rock on, Jimmy Mac, rock on.

One of the bloggers I follow who is VERY POPULAR did something a few months back that caused me to stop believing he was infallible and that is all about the numbers.

He is kinda of controversial in my opinion. Like I said, he is VERY POPULAR and blogging is his full-time job now, so perhaps he is controversial-on-purpose. I will give just an example of what bugs me so much about this blogger.

He has a child and is divorced and lives in an apartment. One day he and his child were carrying a table out to the dumpster and ran across a girl with a dog pulling on a leash that appeared to be ferocious and attacking them. The blogger dropped the table, roared a few inappropriate words, and then proceeded to drop kick the dog across the parking lot. The dog hobbled away crying, obviously injured, and the girl started to cry. Apparently she has Aspergers. Anyway, they ran away. The blogger never mentioned what kind of dog it was.

I forget the exact sequence but the people lived upstairs from him, and the girl was trying to help out, because the mother had cancer and the father was overwhelmed and they were very poor. So blogger man decided this was the perfect opportunity to crank out the popularity machine. He wrote a blog about the incident, and right away people were all about your poor kid, vicious dog, you did right, the dog would have killed him, I would have killed that dog etc. etc. Then there were the dissenters, like me, that thought perhaps he wasn’t teaching his child the right lesson by abusing a dog in that manner, using inappropriate language and scaring the life out of a poor little girl. There were just enough dissenters to make it a little uncomfortable for the hero blogger who “saved his kids life”.

So then of course he apologizes somewhat and decides to do the humane thing, and takes up a collection for the poor folks upstairs. He posted the letter he wrote them, and while I applaud him for raising thousands of dollars, he let it slip that he had actually made a claim against their insurance company for his $100 jeans and the medical bills for the dog bite (one puncture wound). It was right there, in black and white, on the letter he posted in his blog.

I could not believe his audacity, that he sued these poor people for something so minor. I’m sure as a result that they put the dog down and raised his insurance rates. Of course the blogger never mentioned any of the aftermath of his actions. Oh, and the mother died during all this turmoil for this poor family. I’m sure the money really helped the girl deal with it.

But….THOUSANDS of people commented on his blog, and sent in donations. I was not one of them. I made a comment about the poor dog, and hundreds of people turned against me. It was almost like a mob mentality. It was like NOBODY even saw the part where he sued them, they just saw this popular blogger doing yet another good thing.

All this left a very poor taste in my mouth. Big bad blogger. In fact, in some of the photos on his website, he puts on his mean face, and let me tell you, it is NOT pretty. He might think it is funny, but not to me. I think this is his true face, most of the time.

If any of you recognize or follow this blogger, and don’t agree with me, good. I could use some “controversy popularity”.

I want to meet THAT man.  That man who narrows your universe down to just you and him.  Who makes you not care if you interact with another human being ever again.  Just him.  That man. He is enough.  Who is on your mind 24/7.  Who you can’t wait to see.  Who every second apart is pure agony, and every second together is pure delight.  That man.

That man you have been looking for all your life.  That man who maybe you HAVE already met, but it was not the time or place.  I can think of two that I though were that man, but they turned out to be NOT that man.

I think that man is out there.  I’m not sure where, or if I will ever find him.  So if you happen to find him before me, congrats.  There may be true love out there after all.

I want a pair so bad. No, I NEED a pair so bad.  I want to slip into a dream one night and wake up in the merry old land of Oz.  Everything is so bright and vivid and happy there (at least in the last movie).  Except for the wicked witches.  Who really weren’t all that wicked at all, and, some might say, were driven to their wickedness.  But I digress.  I love the story of Oz!

I want to click my magic heels three times and be back home, but home either in the past or the future.  Not home in the present.  That is what I am trying to escape.

I have to be honest here.  I do not like my life in the present right now.  I try to stay so positive, but it is so hard.  (Yes I know there are other people out there worse off than me, but at this point I don’t care anymore, you try laying in a hospital bed for almost a month and hobble around, it’s all about me me me, I’m a selfie).  I want to fast forward to when I am completely healed and can walk like a normal person.  Or I want to rewind to the days of being young and healthy, and knowing what I know now, take better care of myself so I don’t end up how I am here in the present.

I want to go on an adventure, like Dorothy, and then end up back home safe and sound , and appreciate my life all the more.  I want a Wizard to give me a new leg.  I want three friends like the Lion, Tin Man and Scarecrow to help me on my way, because we are all flawed and need help.  We help each other.

So Glenda, or Glinda, whatever, please help me get through this with a touch of your magic wand.  Spread glitter all over me so I shine bright like a diamond.  Transfer some of your goodness into my heart.  Oh, and I wouldn’t mind some of your blonde curls and blue eyes!

Selfie/s is a new word I learned recently from a news program.  It refers to the latest trend of taking massive amounts of pictures of yourself (hence the selfie name) and posting them to social media, like Facebook, Twitter, Instagram etc.  There will usually be some gratuitous “duck lips” pictures present also.

Now, I do like to see pictures, especially pics of Facebook only friends, so I can put a face to the name.  But do I really need to see all kinds of “I’m bored”, “I’m drunk”, “I’m funny” pictures, multiple times a day, EVERY day?  Fishing for a compliment once in a while is great.  Expecting adoration on picture after picture is tiresome.

I would like to say this phenomenon is attributed mostly to the tweeners, but that is not the case.  Sadly there are grown women who abuse the self-portrait feature of their cameras or smart phones constantly.  I am guilty of it myself on occasion.  The news program I was watching says we are becoming a narcissistic society, where it’s all about us.  The selfies.  From what I see on my timeline some days, I would not disagree.