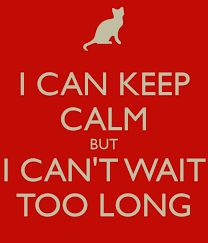 I try to have patience. I really do.  But DAMNIT!  These waits between TV and movies series are way. too. long.

Example.  So you read a series of books.  Let say Twilight.  Or Hunger Games.  The first movie comes out, and everyone is in a frenzy to see it.  Then you wait.  A year if you are lucky.  Usually a year and a half.  Gah.  By then, your frenzy has cooled.  You barely remember what all the fuss was above.  In fact, by the last movie, the attendance number drop way off.

I first noticed this phenomenon with the TV show Nip/Tuck.  Fantastic series.  At first.  The first few seasons were unbelievably good.  So good you couldn’t WAIT to see the next!  Then they started making you wait longer and longer in between seasons.  Until the inevitable happened.  1).  You stopped caring.  2).  The shows just weren’t that good anymore.  3).  You stopped watching. 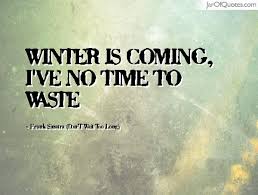 Now I see it with the cable shows, like Game of Thrones.  Geez.  I know Winter is Coming, but Hell will freeze over before this show starts again!  Outlander is starting to piss me off too.  Crikey I read the whole dang series of books after the first season, which was no easy feat, considering it was 8 books of almost 1,000 pages each, and I’m StILL waiting for the 2nd season to start!  I did that with Game of Thrones too.  If I can make the herculean effort, why can’t they?

Oh, and now the popular thing to do with a popular show is to air HALF a season, and then the other HALF like 6 months later.  Really?  Get us hooked and breathless, and then make us wait AGAIN!  I think Walking Dead does that.  I think pretty soon I may get tired of zombies.  And that will be a shame.  I love zombies!

Whatever happened to having a full complement of shows that aired most of the year and then took a summer hiatus?

Wait, I know!  They spend as much money to produce them as a full action movie, so they can’t AFFORD as many episodes!  While I admire the beautiful scenery and venues that they use, wouldn’t it be more affordable to shoot back to back seasons?  Or movies?  Like Survivor does!  They stay at the same location now to shoot two seasons.  Makes sense, financially.  Also, can’t they do something with all the standing around that is prominent in filming?  Can’t they get their lighting/sound etc done faster?  In this day and age of high tech, I find it ridiculous.  But, I know nothing.  Just like Jon Snow.

Speaking of which, how much longer do I have to wait until I find out if he is dead?  April?  Crikey.  Pretty soon, I just won’t care anymore. 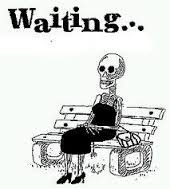