I recently watched the Law & Order Menendez Brothers treatment on TV.  This is a case that has fascinated me for years.  Two well-to-do brothers kill their parents in cold blood. I’m really conflicted about it.

Are they murderers?  Were they abused?  Did they really fear for their lives?  A picture perfect family.  Right?

Unfortunately, there is no good answer.  I think, like OJ, there has been too much publicity about all this.  Too many movies made, too much conjecture.

Unlike OJ, they did confess.  I almost wonder at what in the world they were thinking, after the murders, the way they acted and spent money on lavish lifestyles.  Did they think they were above the law?  Or smarter than the law?  Or did they just not think?

Everyone always looks to Erik as the weak one, the one that broke, that one that confessed.  I can’t imagine how hard it must have been for him.  Lyle seemed to be made of sterner stuff.  But regardless, however much you hate your parents, can you picture yourself waltzing into the den with shotguns and murdering your parents?  It seems maybe there SHOULD have been another answer.  Someone that could have helped them, protected them.

As a frame of reference, I think back to OJ, I personally never doubted his guilt.  Never gave him an ounce of sympathy.  He was violent, he was abuser.  He murdered out of jealousy and rage.  I’m just glad he did end up going to jail eventually, albeit not for murder.

The Menendez brothers?  I think it was a rash decision, that went very wrong.  They were still fairly young, perhaps not mature enough to understand the full ramifications of their actions. 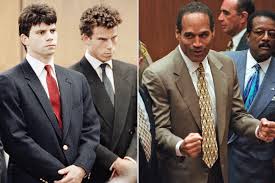